Elam Ministries, based in Dallas, TX,  has unveiled a new Persian (Farsi) translation of the Bible.It is the culmination of a meticulous20 year translation project. This new Iranian Bible will be a true blessing as Iranians seek to know about God and Jesus. Imagine the excitement to have this new Bible in Iran.

I was so joyful as I read the email I received from Elam celebrating the London dedication of their new Iranian Bible in Farsi, known as the ‘New Millennium Version’.  This is wonderful news. 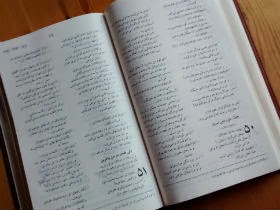 According to an article by Evangelical Alliance, “Elam’s goal is to print 300,000 copies of this new Bible in the next three years, helping to evangelize and disciple hundreds of thousands in Iran.” Operation World website states, Iran has the fastest growing Evangelical population in the entire world! (Afghanistan is 2nd)

Iran Alive’s website states, “more Persians have come to Christ in the 33 years since the Islamic revolution of 1979, than in the 1400 prior years…combined!
The majority of these have come in the last 10 years, since the launch of Christian satellite TV broadcasts.”
By some estimates there are at least 350,000 believers in Iran as compared to 500 in 1979.

You may ask “how has this happened?”
In my view, clearly God is at work in Iran.

Christians have responded to God’s leading in many ways such as Elam Ministries new Persian Bible and by producing Christian content then broadcasting it via Persian Christian satellite TV. In Iran, it is estimated that over 30 million people have access to satellite TV and over 300 million in the Middle East.

Elam’s Media Ministry produces programs for both seekers and believers. Iran Alive Ministries, based in Dallas, also provides such broadcasts as does SAT-7 and other organizations.

The vision of Dallas based Iran Alive Ministries, founded by Dr.Hormoz Shariat, is to “transform Iran into a Christian Nation, in this Generation”,in accordance with Jeremiah 49:38 “I will set my throne in Elam,” declares the LORD.

(Elam was an ancient Pre-Iranic civilization centered in what is now far west and southwest Iran. Note- Elam was one of the sons of Shem, whose father was Noah.)

Elam Ministries mission is to “strengthen and expand the church in the Iran region and beyond” including church planting, leadership training, TV & Internet outreach, women’s ministry & the new Persian Bible.

Their website states: “Years of suffering in Iran have created a deep thirst for truth in the hearts of most Iranians. As a result, there is an overwhelming demand for the Word of God in Iran. Wherever the Scriptures reach, people are turning to Christ.”

Clearly there is a great need for these new Persian Bibles to bring scripture to Christian population that is increasing dramatically in Iran and elsewhere in the Middle East.

God will bless the brave and visionary efforts of all those working in the Middle East for His kingdom.

In the email I received from David Yeghnazar, USA Director of Elam Ministries, he writes about the Persian Bible dedication event.
“The Bibles – which are beautifully bound – were handed round the whole auditorium. There was then an intense time of intercession for the hundreds of thousands of Iranians who will soon receive this new translation”
“We believe that when a country receives a new translation of the Bible, the church is always strengthened.”

He asks Christians to Pray

Please join me in the privilege of praying

and To God be the all the Glory, always

Elam Ministries -based in London with an office in the U.S. (Georgia). Learn more about all of their work in Iran.

Article by Evangelical Alliance on the New Persian Bible

Iran Alive Ministries – based in Dallas

Evangelical Alliance – based in the U.K., the largest and oldest body representing the UK’s two million evangelical Christians.

Do NOT follow this link or you will be banned from the site!